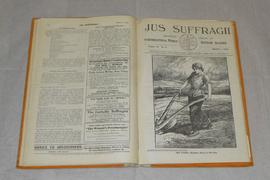 The Alliance began in 1902 in Washington, United States of America when a group of leading suffragists from 11 countries met and decided to form an organisation. This organisation was envisaged as a central bureau to collect, exchange and disseminate information on suffrage work internationally. The IWSA was constituted in Berlin in 1904; its periodical, Jus Suffragii, began in 1906, and the Alliance met regularly until the outbreak of war in 1914. The group continued its operations throughout the First World War, and by the end of 1920 the IWSA had affiliated societies in 30 countries throughout the world, with its headquarters in London.