Material relating to the establishment of a Lesbian and Gay Committee on Camden Council.

Material relating to Camden Council Lesbian and Gay Unit, including: circulars for public meetings and consultations; invitations to training days and events; correspondence re setting up a Unit steering group; role descriptions for Unit workers; and related material.

Material relating to Camden Lesbian and Gay Project, including: press releases, bulletins/digests, correspondence and circulars regarding establishing a Lesbian and Gay Unit within Camden Council; material (including flyer and follow-up notes) from Camden Lesbian Day on 3 May 1986; proposals for a L&G Unit by a Women’s Committee Lesbian Project Worker; and related material. 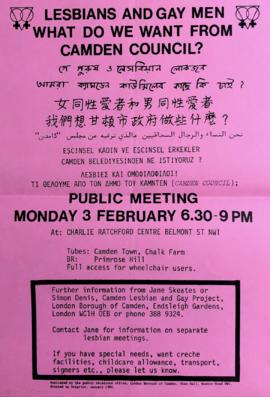 Camden Council’s Women’s Committee and its Lesbian & Gay Committee worked closely with CLCBLG and were their central links to the state, acting as advocates for women's and lesbian & gay issues on 'the inside'.